In 1945, World War II ended in Europe when the German capital was conquered by the Soviet Army. The region became part of the Soviet sphere of influence. Around Berlin, Soviet soldiers were part of everyday life for almost 50 years. The divided Berlin became the symbol of the Cold War. Find out more about the region's Soviet history in the Blog! No other city was as important to the Allies as Berlin (Берлин). As the German capital it was the starting point of World War II. The "Operation Berlin" of the Red Army was to become the last major battle in Europe - and one of the bloodiest. A few days after the red flag was raised above the Reichstag (Рейхстаг), the capitulation of Germany was signed in Berlin-Karlshorst (Берлин-Карлсхорст). The war was over.
Due to the presence of the four allies (the Soviet Union, the USA, Great Britain and France), Berlin was the city where the West met the East during the Cold War. This was exemplified by intensive espionage, the nuclear arms race and the Berlin Wall.
With numerous facilities such as the Soviet Embassy, the largest headquarters of the Soviet secret service KGB outside of the Soviet Union, and the seat of the Soviet Military Administration in Germany (SMAD), later known as the Soviet Control Commission, East Berlin was a center of political power for the Soviets.
After the fall of the Berlin Wall, German reunification and the collapse of the Soviet Union, the last Russian soldiers left Germany at the end of the summer of 1994. Of course, the farewell ceremony took place in Berlin. 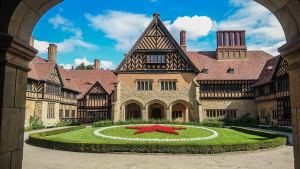 Potsdam has had great political and military significance for centuries. Situated in the immediate vicinity of the German capital, it was the residence and garrison town of Prussia. After World War II, the Red Army first set up its German high command in Potsdam (Потсдам). In the summer of 1945, the Soviet dictator Josef Stalin, the British head of state Winston Churchill and the US President Harry S. Truman came to the Potsdam Conference. During this time, almost one third of the buildings in Potsdam were occupied by the Soviets and tens of thousands of Soviet soldiers settled in the city. The close proximity to West Berlin made Potsdam one of the most important sites in the Cold War between the West and the East. When the Soviet intelligence service KGB and the American intelligence agency CIA exchanged several agents at the Glienicker Bridge, the border crossing became known as the "Bridge of Spies" (Шпионский мост). For nearly 50 years, both Soviet soldiers and restricted areas in the inner city were part of everyday life of this historic city. 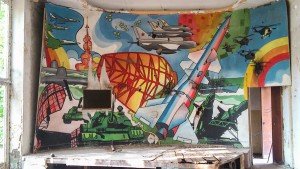 During the Cold War, West Berlin was a Western enclave in the middle of the Soviet sphere of influence. Therefore, the region around Berlin was of particular strategic importance. Positioned directly at the front line of a potential war with the West, the troops stationed in East Germany were the avant-garde of the Soviet Army. The Soviet Union stationed a large part of its armed forces and institutions around Berlin, claiming as much land area in Brandenburg as in the rest of the GDR combined. In some places, there were more Soviet inhabitants than locals. For decades, the presence of Soviet troops and regular maneuvers on the large military training grounds were a familiar spectacle in many rural areas.
Although the Soviet army was ever present, its inner world remained largely hidden. Shielded behind high walls, thousands of Soviet soldiers lived under the most simple and difficult conditions in isolated military towns.
Wünsdorf (Вюнсдорф), located south of Berlin, was not only a Soviet town with more than 50,000 inhabitants but also the headquarters of the Soviet Army in Germany, thus the GDR’s secret center of power. The government of the GDR could not make any important decisions without the consent of the Soviets. 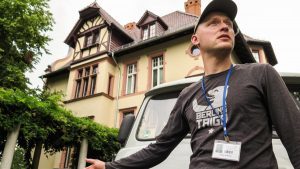 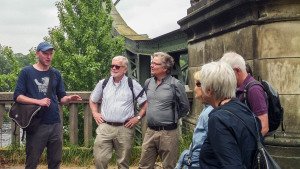 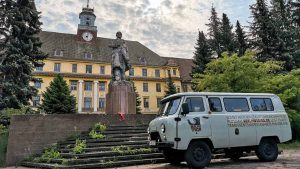